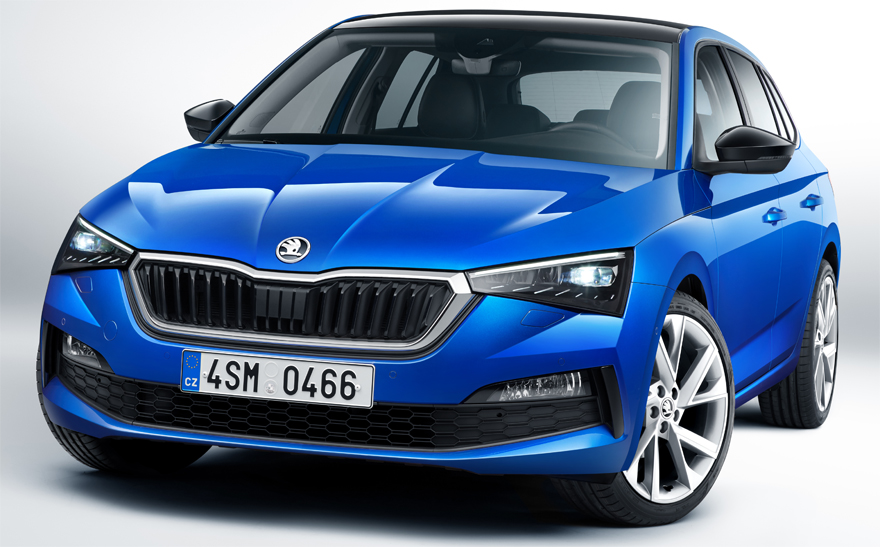 ŠKODA Ireland have today revealed further details of the eagerly anticipated SCALA compact hatchback, which replaces the previous RAPID Spaceback and will be the first ŠKODA model to be based on Volkswagen Group’s A0 MQB platform.

The design of this all new five-door hatchback was influenced by the VISION RS study which was unveiled at the Paris Motor Show in October and combines emotive design with a high degree of functionality and state-of-the-art connectivity. At first glance, the commanding exterior exudes confidence with clearly defined surfaces and alloy wheels up to 18” in size which have been aerodynamically optimised to make the car more streamline.  New sculptural shapes, dynamic features and sharp lines lend the vehicle a dominant and authentic appearance.  In addition, SCALA will be the first ŠKODA production model in Europe to bear ‘ŠKODA’ lettering on the tailgate instead of the ŠKODA logo.  The SCALA also features LED headlights and tail lights as standard with full-LED versions available as an option, which for the first time, come with dynamic rear indicator signals. 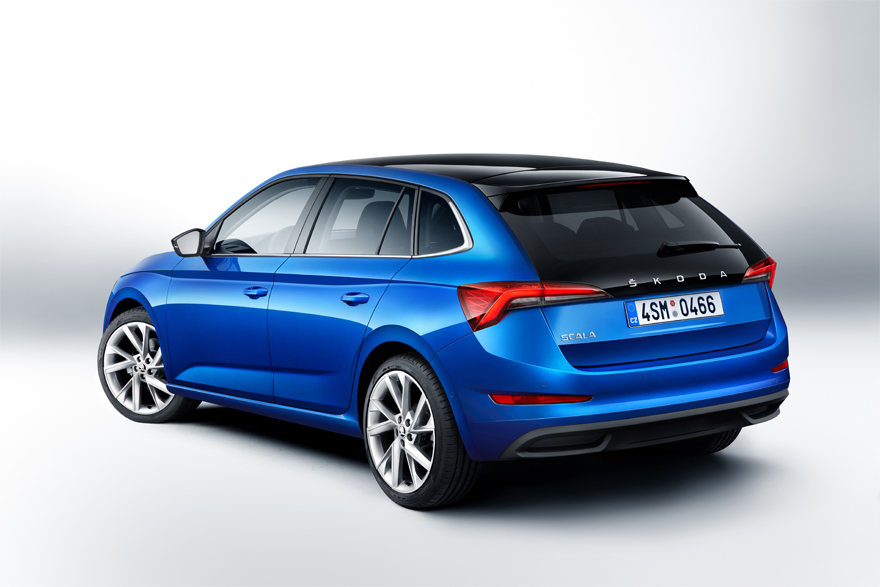 On the inside, the modern look continues with the focal point being the infotainment display which measures up to 9.2” in size, making it the largest screen in its class. The optional 10.25” customisable Virtual Cockpit display, which is built into the dashboard, is also the largest in the segment and allows drivers to choose between five different display settings. The interior is also influenced by the VISION RS concept study and combines ergonomics, emotiveness and spaciousness. In addition, The SCALA will come standard with a host of familiar simply clever features including the umbrella in the driver’s door, the ice scraper in the fuel filler flap and the easy open cup holder.

In typical ŠKODA style, the SCALA offers a very spacious interior, which comes close to that of the ŠKODA OCTAVIA thanks to its long wheelbase measuring 2,649 mm. The ŠKODA SCALA measures 4,362mm in length, 1,793mm in width and stands at 1,471 mm high. In context this is 58mm longer, 87mm wider and 12mm higher than the RAPID Spaceback model that it is replacing. The SCALA also has one of the largest boots in its class with a capacity of 467 litres, which increases to 1,410 litres with the rear seats folded down.

The ŠKODA SCALA comes with a choice of four EU6 engines ranging from 95hp to 150hp which include three petrol engines and one diesel. All engines come with direct injection and a turbocharger as well as Stop/Start technology and brake energy recovery. The 1.0TSI 95hp petrol engine is set to be the most popular among Irish customers and is matched with a manual 5-speed gearbox as standard. The 1.0TSI 115hp and 1.5 TSI 150bhp petrol version is available with a manual 6-speed gearbox or an automatic 7-speed DSG option.  The 1.6 TDI 115hp diesel version will only be offered with a 7-speed DSG transmission.

SCALA will enter the Irish market in June 2019 in time for the 192 registration period. John Burns, Dealer Principal at Burns Car Sales, commented, “With the new ŠKODA SCALA we are opening a new chapter in the ŠKODA compact hatchback segment. It is a completely new product which sets benchmarks in this segment with regards to technology, safety and design. In 2019 the ŠKODA brand increased share in each segment we compete. We are very confident with the SCALA we can attract and convert Opel Astra and especially Ford Focus customers in 2019 and into 2020”

Final pricing and specification will not be confirmed until March but in Ireland, SCALA will follow the conventional ŠKODA trim line structure of Active, Ambition and Style. 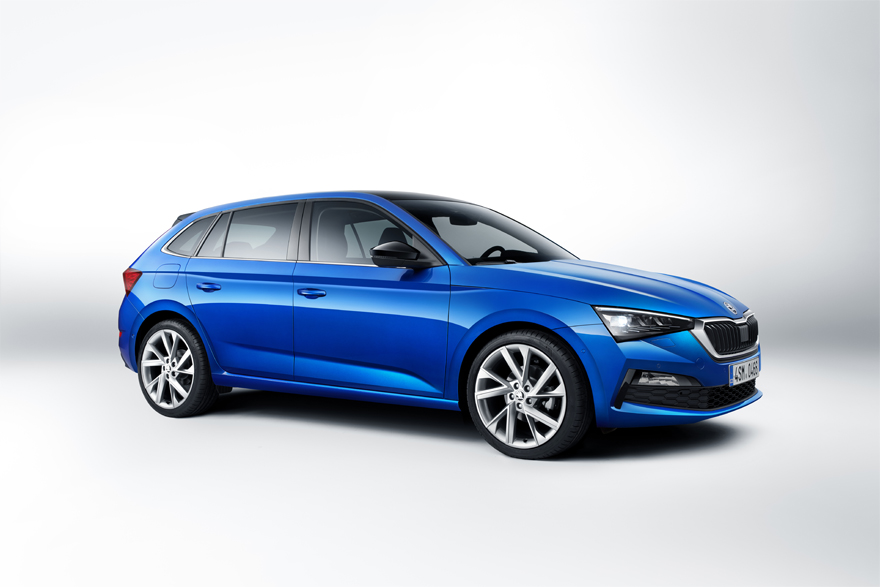 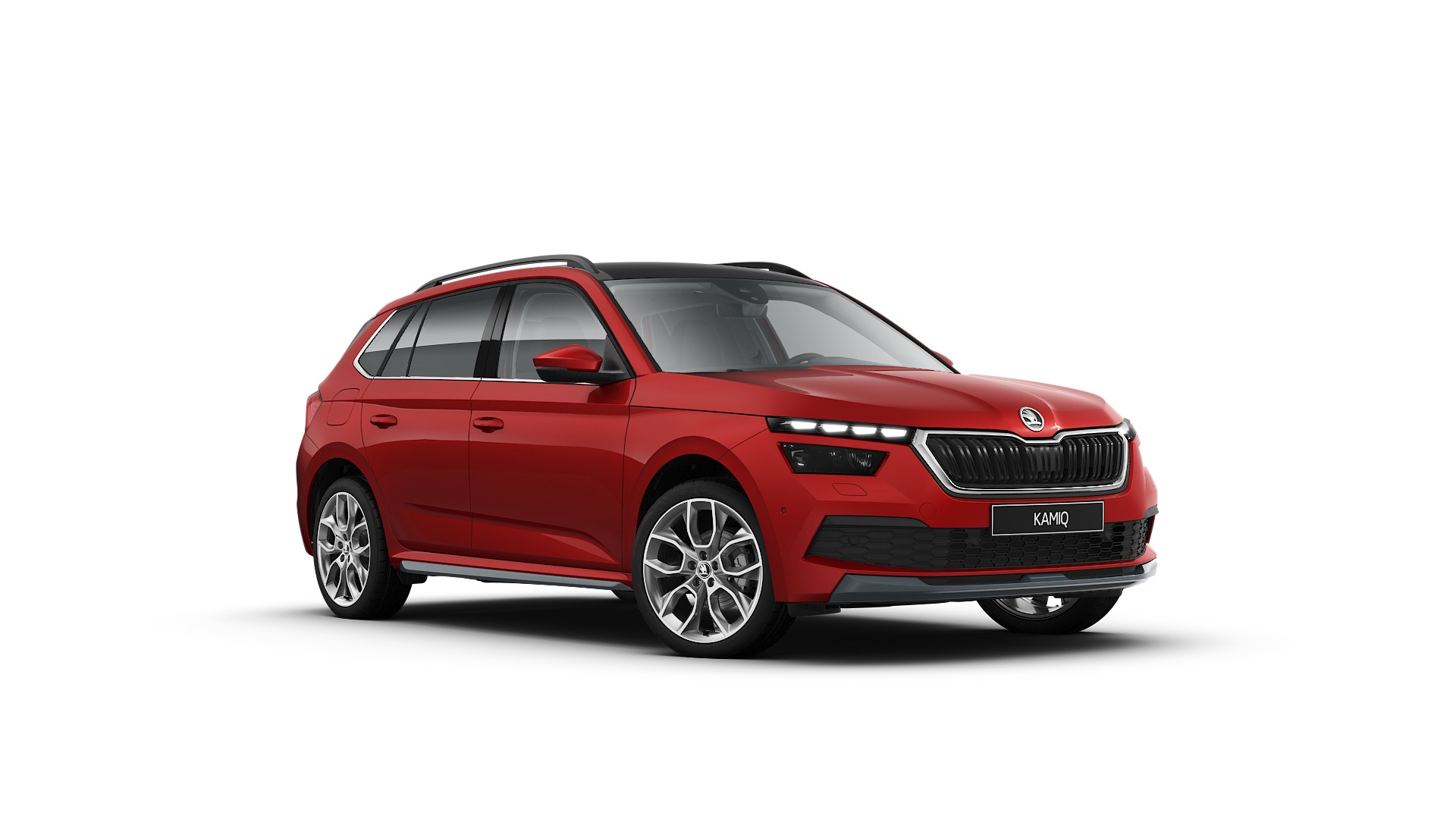